One of the most attractive features of a woman’s physique is her buttocks. There are several techniques available to enhance the backside. With the Brazilian Butt Lift, our surgeons not only directly enhance the buttocks, but also improve the framework around it.

Based on the patient’s anatomy, our surgeons will recommend either a buttock implant, liposuction around the buttock and hips, a lower butt lift—the “Del Mar Butt Tuck” (infragluteal thigh lift)—and/or fat transplantation to the buttock, commonly known as the “Brazilian Butt Lift.” These techniques can be used individually or in combination to create a beautiful backside.

The shape and size of the buttocks are often driven by genetics, aging, and fluctuation in weight. Our Brazilian Butt Lift in San Diego is a buttock augmentation protocol that doesn’t require gluteal implants. Instead, fat is removed from other areas of the body—typically the hips and thighs—and grafted to the buttocks.

Why Choose Ranch & Coast for a Brazilian Butt Lift?

Our founder, Dr. Paul Chasan, M.D., is not only board-certified but is also a Fellow of the American College of Surgeons (F.A.C.S.) His qualifications and ethical standards are of the highest integrity.

Our facility is the only place in the Del Mar area which offers a 24-hour stay period for post-operative care. If that’s your preference, please ask us about the service during your meeting with one of our board-certified plastic surgeons.

In addition to Dr. Chasan, Ranch & Coast is proud to present Dr. Cameron Francis as a Brazilian butt lift surgeon.

Dr. Francis began his medical career by earning a Bachelor of Science in molecular biology, followed by his medical degree from UC San Diego School of Medicine. He went on to complete a prestigious two-year research fellowship in craniofacial and pediatric plastic surgery, after which he completed a comprehensive, six-year integrated plastic surgery residency. A leader in his field, Dr. Francis has published over 20 peer-reviewed articles, many of which are the result of original research in the field of plastic surgery. Dr. Francis proudly performs the Brazilian butt lift at Ranch & Coast Plastic Surgery in San Diego, routinely producing stunning results that his patients love.

What are the Benefits of a Brazilian Butt Lift?

A Brazilian butt lift helps to achieve several important cosmetic goals at once. First, it can create a rounder, more feminine backside that helps to boost the patient’s self-image and provide them with a whole new world of wardrobe options. Secondly, the procedure results in a slimming effect for the donor area from which the fat cells are harvested for transfer. Unlike augmentation with butt implants, a Brazilian butt lift procedure does not require a lengthy downtime, aesthesia or excessive scarring.

What to Expect from the Brazilian Butt Lift

Our Del Mar Brazilian Butt Lift has the added benefit of removing some excess fat from problem areas on your body. Clients who choose the procedure see benefits beyond the enhancement to their backside. If you have issues with belly fat or carry weight on your thighs, this procedure can kill two birds with one stone. If you are slender with little excess body fat, you should consider other options.

The real benefit from a Brazilian Butt Lift is the ability to reshape the silhouette. This procedure was popularized by a number of celebrities and has given new credence to curves. This buttock enhancement technique creates rounder, fuller buttocks using your body’s own tissue.

It’s organic and natural—a lasting solution for clients who are tired of fillers and aren’t interested in implants.

As a side note, our surgeons also perform implant-based buttock enhancement, a surgical process using gluteal implants to reshape the contour of the buttocks.

Patient safety is always the surgeon's first priority. They have performed hundreds of these procedures and are very confident in their ability to deliver the best outcomes for their clients. That is particularly important in a complex procedure.

Unfortunately, the popularity of this procedure has created opportunities for less experienced practitioners with limited qualifications. Every surgery involves some risk—minimize it by working with qualified professionals.

If you’d like to discuss a Brazilian Butt Lift in San Diego, please call our office at 858.450.1555. As a Fellow of the American College of Surgeons, Dr. Chasan and Dr. Francis' experience, training and standards are impeccable.

During your initial consultation, the medical team will capture your health history, provide instruction for your pre-op preparation and schedule a date for your surgery.

You will work with our doctors on how to best sculpt your new silhouette. Determining where to harvest the fatty tissue—belly, thighs, hips—is the first decision to be made. One of the goals of your procedure should be leveraging the surgery to create a more aptly proportioned body shape.

Based on the anticipated changes from the liposuction—typically a more defined waist, a slimmer hip and thigh—your board-certified plastic surgeon will determine the most proportional change for the buttocks themselves.

As the buttocks are rounded, the slope of the curve of the back is exaggerated as well. Overall, it’s a very sexy look from a single procedure.

Please make sure you have followed the pre-op instructions on the day of your surgery. We will be using general anesthesia, so take care not to eat or drink as per the guidance. You should also plan to have someone drive you home and be aware that the recovery period for this procedure is typically longer than some other cosmetic procedures. Our office will provide a comprehensive list of before and aftercare instructions.

Once you have been sedated, the doctor will begin the extraction of the fat cells. He will deliver local anesthesia to the affected areas to help minimize bleeding or swelling during surgery. A tumescent infiltration cannulas (thin tube) is inserted through a tiny incision and used to loosen the tissue and extract the fat cells.

Once the fat has been extracted, it goes through a purification process so it can safely be injected into the buttocks. Based on decisions made during the original consultation, the surgeon will inject the fat cells in designated areas to increase contour and roundness, altering the appearance of the buttocks.

After the surgery, you will be taken to the recovery area to naturally awaken from the anesthesia. You should expect to experience some swelling and bruising. The doctor will provide any necessary medication for pain management. Most patients are up and walking by the second day—this will also help defray any after-effects from the anesthesia.

Patients who undergo a Brazilian Butt lift in San Diego will be issued a compression garment to be worn on the areas where the fat was extracted.

This is typical for any liposuction procedure and is done to support the healing process, minimize discomfort and help your skin retract and tighten now that the fat has been removed.

It is safe to lay on your back after surgery. Both the compression garment and the pillow will be needed for approximately eight weeks after your procedure. One thing we can tell you—the outcome will be well worth it.

Though you need to avoid high impact exercise, you can begin walking as soon as your doctor gives the okay. And typically, you can resume your normal activities around six to eight weeks.

I had breast augmentation with Brazilian butt lift, I am loving my results.

Dr. Chasan was very nice, sweet, and I love the fact that he is a perfectionist!! which makes me look better. 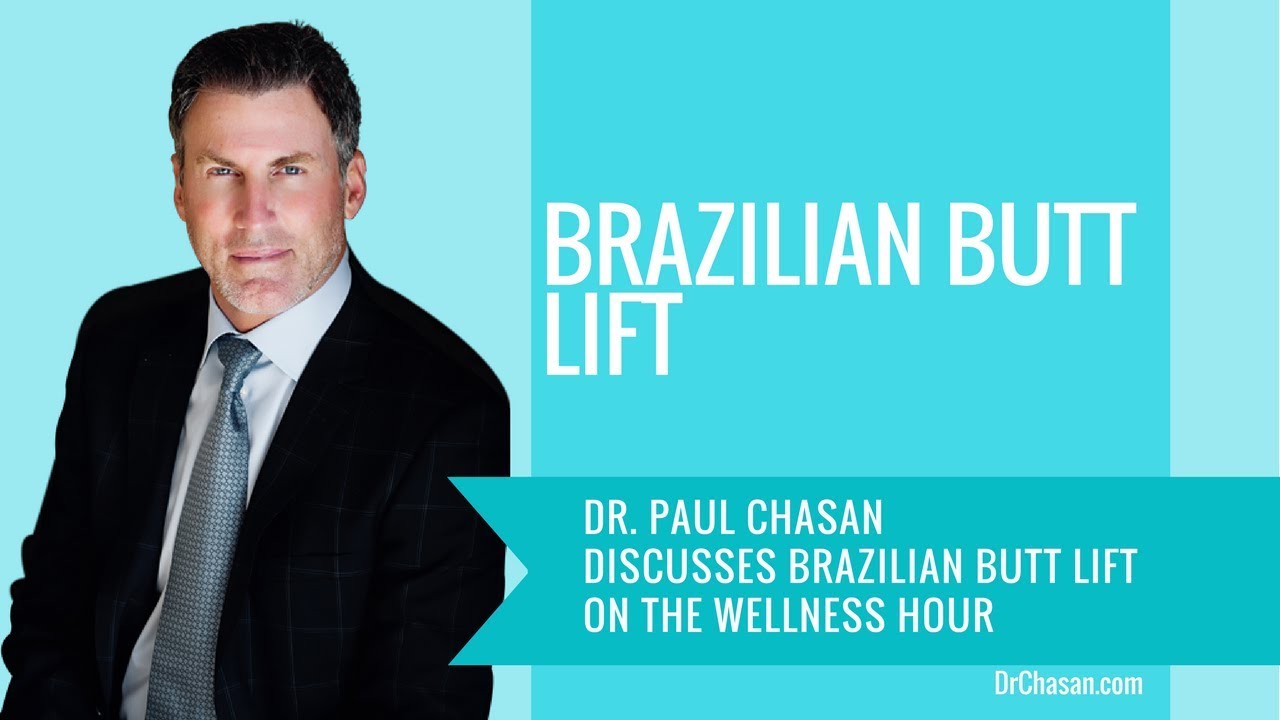 Transcript of the Discussion

Randy: Brazilian Butt Lift. You’ve been doing them for quite some time.

Dr. Chasan: Yes, I have. I think Brazilian Butt Lifts are probably one of the biggest new techniques in our arsenal. Not every woman is endowed with a great butt. And it’s kind of one of those things been ignored for many years, you know? Breasts are beautiful. Butts are beautiful. And we really haven’t had the techniques until the Brazilians kind of brought it up to us. And I hate to admit it, you know, in the United States we think we’re the best at everything, but they had as on that. And that’s one place, and I spent two weeks in Brazil learning their techniques.

Randy: So, what are you doing? I mean what exactly? You’re not doing implants.

Dr. Chasan: I do implants too.

Dr. Chasan: I do implants, I do fat transfer. If they don’t have any fat and they have a flat buttock, then I’m gonna use an implant. If they have some fat, they have to have some fat. Then I’m gonna use the fat that I get from the liposuction and implant that into their buttock. Now, up until, you know, five, six years ago when I wasn’t doing a lot of breasts…Brazilian butt lifts, I could contour around the buttock and make the buttock look a lot better.

Dr. Chasan: Liposuction. Right. But now I can even take that farther. I can contour around the buttock, take that fat that I have harvested and then inject it into the buttock. And now, not only do you get a butt lift and its skin is tighter, and the butt looks rounder, and more shapely, and some of the cellulite goes away. The fat has some effect that makes a whole buttock look more rejuvenated.

Randy: And I was asking earlier, what about the lumps?

Randy: And so you’re injecting fat in there. How do you get that round?

Dr. Chasan: Yeah. So, if you blow up a balloon it’s…you know, goes from a shriveled thing to a round thing. And that’s what you’re trying to do. It’s one of those things in life that actually works better than it should. It works better than you think.

Randy: Is that right?

Dr. Chasan: Yeah. Initially, I think why we were, surgeons in this country were a little reticent to start doing Brazilian Butt Lifts is for that very fact that we thought we would inject a bunch of fat and it’s gonna die and get a lot…very lumpy. I have injected up to 900 ccs per each buttock, no lumps. No lumps. It’s all taken up. It all lives and I mean the patients are thrilled, and you don’t get a lumpy hard butt.

Randy: So it’s subtle though for some people. You don’t have to have a big result.

Randy: Is this common, this Brazilian Butt Lift?

Dr. Chasan: It is. It’s very common, especially now with Kim Kardashian and all. You know, every era has its person. Remember “Bay Watch?”

Dr. Chasan: Pamela Anderson. Now a lot of people wanted big breasts after that. Every era has their person. This person, this era, Kim Kardashian. Now, she has this tiny waist and big buttock. And a lot of women want that look. And you know what? She looks very beautiful. And in some way, like I had mentioned before, the buttock has been kind of ignored. And now it’s celebrated here in this country, and now we can do something about it. So, take a look at this photo, Randy, look at look at her waist. I tend to be very aggressive with the liposuction. So I was able to contour her waist very narrow, and then look at the difference between the proportion between her waist and her buttock. Trying to get that waist skinny and give that a proportional difference between the waist and buttock I think gives her a lot of beauty. And then look at the lower picture. See how her buttock protrudes out? It’s more round and lifted. So I think that that’s when the…like one of the most beautiful parts of a woman’s body that’s been ignored for so many years in cosmetic surgery.

Dr. Chasan: That’s all in the design.

Randy: The fat doesn’t get lumpy and bumpy?

Randy: Are men doing this too?

Dr. Chasan: I haven’t done any Brazilian Butt Lifts on men, but I have done buttock augmentation on men.