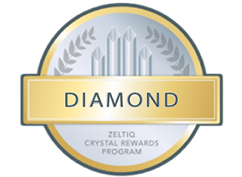 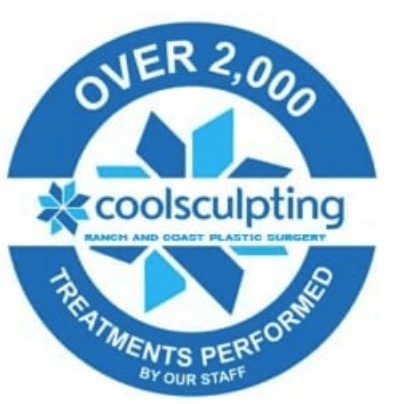 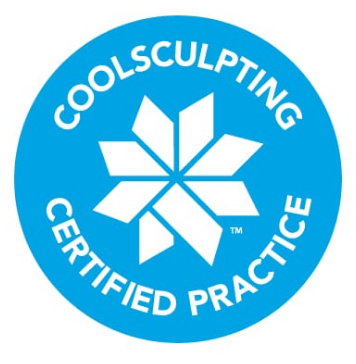 Cooling applicators are applied to unruly, fatty areas, next, unnecessary fat is frozen, then, over the course of several weeks, the body naturally discards the crystallized fat.

This non-invasive procedure freezes and destroys fat cells that are hard to get rid of through diet and exercise alone. It’s a great alternative to liposuction and each session lasts only 60 minutes. Downtime is minimal and you can treat as little or as much as needed per our recommendations.

Dr. Chasan is the only Plastic Surgeon in North County-San Diego with two CoolSculpt machines, allowing him to work on two areas at the same time.  This decreases the procedure time in half as each area takes 1/2 hour.

Ranch and Coast Plastic Surgery now offers the latest in body contouring with CoolSculpt. CoolSculpting simply freezes the fat away, so there is no down time or incisions with this procedure. Approved by the U.S Food and Drug Administration (FDA), CoolSculpting smoothly cools undesired fat cells in the body resulting in a painless, controlled eradication of fat cells.

The CoolSculpt method is based on science performed by the Wellman Center for Photomedicine at Massachusetts General Hospital in Boston, Massachusetts. Research determined that fat cells are more vulnerable to cold temperatures and when introduced to these cold climates are effortlessly and permanently demolished.

Beginning weeks after the cooling application, the cooled fat cells initiate the process of solidifying the fat cells without destroying surrounding tissues, eventually causing the cells to shrink and disappear naturally. Gradually as the cells diminish, the depth of the fat layer will be reduced.

Treatments are applied by area so you are able to target your stubborn fat areas and customize a plan to fit your personal needs.

This FDA cleared procedure freezes away unwanted fat for good without surgery or downtime.

Dr. Chasan Discusses CoolSculpting and His Personal Treatment Experience on the Wellness Hour

Randy: You’ve been on the program before talking about a lot of different topics. And this CoolSculpting, first off, does it work?

Dr. Chasan: It does. CoolSculpting is cool. When it first came out, I was very skeptical and I elected not to really buy into it. I just didn’t think that it would work that well. And so, I’ve been watching it. It’s been around for a few years. And what I found is a couple of my friends had it done. And they said, “Hey, I did that CoolSculpting.” I said, “What’d you think?” “Loved it.” That was one friend. Okay, maybe just that one friend is kind of a happy person. Two friends, three friends who had it done.

Dr. Chasan: It is, and the general consensus has been very positive. Now, ZELTIQ, the company, they’ve invested 10 years of research into this to get the right temperature, the right length of time to kill fat and preserve the skin, muscles, nerves, and all that. And so, I didn’t want to get into this until I was absolutely sure that it was gonna work. The last thing a surgeon wants is a device that doesn’t work. And I’ve had those devices, so I was a little slow.

Randy: So with this…just trying to understand how it works. Okay. So fat that you can grab, right?

Dr. Chasan: Yes. If you can grab it, you can freeze it.

Randy: So the machine grabs…let’s say abdomen area, grabs the fat, it’s like freezes it and that fat is killed. So the fat cells are killed and they go away. They don’t come back just lipo.

Dr. Chasan: It’s a simplified way. And now the company has developed some new techniques where they have a flat applicator. Used to be… One of the problems, when it first started, it was limited. You could just have one applicator, only what you can suck, like this much, into the applicator. But now they have different applicators. They’re coming out, one for the neck. They have flat applicators for the inner and outer thighs. They have a bigger applicator so you can do the total top of the abdomen. And so, now that they have all these new applicators, I think the results are better. Because if you just have a small applicator and you’re trying to do an abdomen and you need eight different applications to get an abdomen, that gets a little long and people don’t want to do that. The good thing is it’s a one-shot deal. Now, I see that…

Randy: You say you wanna get this done.

Dr. Chasan: I had it done. And that’s the thing that kind of convinced me.

Randy: Why would you wanna get this done? I mean, you’re a fit guy.

Dr. Chasan: You know, I work out. I eat well. And, I think, just about every guy north of 40 is gonna have that little fat deposit just around the belly button, the love handles. I got it and now I’m over 50 and don’t matter how good a shape I’m in, no matter how good my diet is, I got that. This is not only for women, this is for guys. This is a guy’s thing because guys… You know, women understand downtime. Liposuction, there’s downtime, there’s surgery. This is like, you can read The Wall Street Journal, you get this thing on, it takes an hour and you’re gone. And the thing with the new applications, the bigger applicators, you get a bigger area. But, you know, you can do a love handle and abdomen, and if you’ve got two machines going, you’re in and out in an hour, maybe two at the most, and you just read The Wall Street Journal cover to cover. And you know what, after three weeks or, you know, a month, you start to see the results.

Randy: Because the fat has to die, is that right? The body eliminates it?

Dr. Chasan: Absorbs it. I had it done just as a test run. I had my lower abdomen where I had that little pinch of fat and I’m at a month and I’m seeing a difference. I mean, not like a little difference. I hate things where you’re like, “Oh, I think I see a result.” No, I see a result. I could take my shirt off right now, it’s only been a month and I can show you. I have a little indentation right there. And that little piece of fat’s gone.

Randy: So liposuction is the number one procedure still, by any chance?

Randy: It definitely works. Nobody disagrees with that. But the big question is, does this work, and you’re saying it works. Do you think this will turn out to be one of those things where it’s like a big…like Botox, where people are getting it to eliminate fat, freezing your fat?

Dr. Chasan: Yes. It’s just starting. This is a very new technique. It works really well. As they get more sophisticated in the use, as people start to do it more, I think you’re gonna see that a lot of liposuction is replaced by CoolSculpting.

Randy: So when is somebody a good CoolSculpting, freezing the fat patient? Because you do lipo too, right?

Randy: So when should…you know, I mean, what’s the decision-making whether they’re good for CoolSculpting or good for lipo?

Dr. Chasan: Well, that’s…you brought up an important point, is it’s important that the person who’s evaluating you for CoolSculpting also does liposuction. Because, you know, if your only instrument’s a hammer, the whole world looks like a nail. So there is a defining point between what… And that’s a judgment call because CoolSculpting is great for very specific, localized areas. But now that they’re having these new applicators, it’s becoming a judgment call. Now, if somebody has a lot of big fatty areas, then liposuction’s better. If they have just defined areas…

Randy: Or just back fat.

Dr. Chasan: Exactly. Those are just…

Randy: Freeze it off.

Dr. Chasan: Just freeze it off. Those are perfect, perfect areas for CoolSculpting. And the thing is there may be a degree…like the consensus is that, with CoolSculpting, you have a 25% improvement. And now with more experience, some people come back and do that same area again. Remember, no downtime. In fact, after I did my CoolSculpting, I went golfing the next day. I shot an 82, that’s pretty good.

Randy: You’re bragging about your golf game on my show now. Okay, good.

Dr. Chasan: But I would say that, as a guy, I’m kind of bugged by that little love handle and that fat around my belly button, not enough to have surgery but to spend an hour, no downtime? Most guys don’t wanna take time off work and all that. So it was perfect for that. And I would say that, you know, the results I’m seeing are terrific. I’m seeing great results, liposuction-like results.